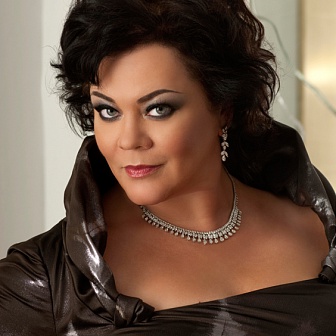 Her debut in the part of Sieglinde in Wagner’s Die Walküre at the Bayreuth Festival was a first step towards soprano repertoire, in December 2002 she opened the season of Teatro alla Scala in Milan in the title role of Iphigénie en Aulide conducted by Riccardo Muti.

Since then she made several highly successful debuts as a soprano: Maddalena in Giordano’s Andrea Chénier in Vienna, Lady in Verdi’s Macbeth in Sevilla, Isolde in Wagner’s Tristan und Isolde in Rome with Accademia di Santa Cecilia, the title role of Ponchielli’s La Gioconda and Leonora in Verdi’s La Forza del Destino in London. 2005 she debuted in the title roles of Tosca in Florence, of Ariadne auf Naxos at the New York Metropolitan Opera and of La Wally at the Vienna Konzerthaus. She had a huge success in her debuts in the title role of Norma in Dresden, as Elisabetta in Verdi’s Don Carlo in Turin, as Aida at Teatro alla Scala in Milan as Amelia in Verdi’s Un Ballo in Maschera in Florence, 2008 with her first fully staged Tristan und Isolde with Paris Opera in Tokyo and Kobe and in the title role of Gluck’s Iphigénie en Tauride in Valencia. In 2010 she made her highly acclaimed debut in the part of Odabella in Verdi’s Attila conducted by Riccardo Muti at the Met, 2012 she added the title role of Cherubin’s Medea in Valencia under Zubin Mehta to her repertoire.

In 2013 she made her debut as Brünnhilde in a concert performance of Siegfried in Berlin conducted by Marek Janowski.

As a concert and recital singer Violeta Urmana performs a large repertoire from Johann Sebastian Bach to Alban Berg in all important music centres in Europe, the United States and Japan. In 2012 she performed for the first time the part of ‘Tove in Schönberg’s Gurre-Lieder at the Vienna Musikverein unter Zubin Mehta.

Many of her opera productions have been documented on DVD, in Tony Palmer's film The Search for the Holy Grail she took the role of Kundry.

In 2002 in London she received the prestigious Royal Philharmonic Society Award for singers.

In December 2009 she was awarded the title Kammersängerin at Vienna State Opera.

Among future projects of Violeta Urmana are La Gioconda in Paris, Cavalleria rusticana in St. Petersburg, Tristan und Isolde in London, Madrid and Paris, Amneris in Aida at the Arena di Verona and in New York, Tosca in Vienna, Eboli in Don Carlo in Vienna and Berlin as well as many concerts throughout Europe.