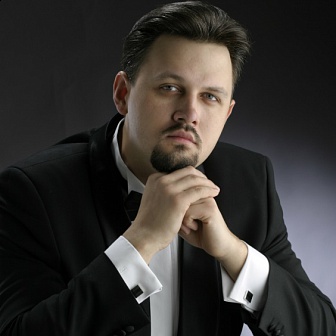 Alexey Tikhomirov graduated from the Kazan State Conservatoire as an academic chorus conductor in 2003. In 2006, he graduated from the Vocal Department of the Conservatoire. In 2003 when still a student, he performed the title role in Donizetti’s Don Pasquale under the baton of Fuat Mansurov. In 2004–2006, he was a trainee with the Galina Vishnevskaya Opera Singing Centre, where he performed the following parts: Sobakin and Malyuta in Rimsky-Korsakov’s Tsar’s Bride, Monterone and Sparafucile in Verdi’s Rigoletto, Mephistopheles in Gounod’s Faust, Strafokamil in Erenberg`s Vampuka, the African Bride, Rene in Tchaikovsky’s Iolanta, Gremin in Tchaikovsky’s Eugene Onegin.

Since 2005, he has been a soloist with the Helicon Theatre in Moscow. At the Theatre, he performed the title part in Mussorsky’s Boris Godunov, Don Basilio in Rossini’s Il barbiere di Siviglia, in Sobakin in The Tsar’s Bride, Andrey Degtyarenko in the production Fallen from the Sky after the opera Story of a Real Man by Sergei Prokofiev, Semyon in the production The Big Lightning based on different compositions by Dmitri Shostakovich, and other roles. He has toured with the Opera Singing Centre and the Helicon Theatre a lot.

In 2006, he participated in the production of Rigoletto (the role of Sparafucile), realized by the Toscanini Foundation in Busetto. In 2006–2007, he performed Don Basilio in Il barbiere di Siviglia in Limassol and Nicosia (Cyprus), Sobakin in The Tsar’s Bride in South Korea, China, and at the Bellini Theatre in Catania. In 2009, he performed Agamemnon in Gluck’s Iphigénie en Aulide at the Roma Opera, the bass part in the Mass in E major at the Musikverein Concert Hall in Wien, and Osiride in Rossini’s Moses and Pharaoh at the Salzburg Festival under the baton of Riccardo Muti. The same year, he performed Il Commendatore in Mozart’s Don Giovanni at De Doelen in Rotterdam and the Zoetermeer State Theatre (under the baton of Jan Willem de Vriend). He participated in the Russian Openings gala at the Garnier Hall of the Monte Carlo Opera with the Carlo Felice Orchestra under the baton of Dmitri Jurowski. He sung the bass part in Mozart’s Vesperae solennes de Confessore at the Hercules Centre in Munich with the Bavarian Radio Orchestra under the baton of Riccardo Muti. In 2010, he performed Boris and Pimen in Boris Godunov at the Opéra Royal de Wallonie, the bass part in Verdi’s Requiem in Liège and at the International Festival in Santander, Gremin in Eugene Onegin, Kochubey and Orlik in Mazeppa at the Lion Opera, Ramfis in Verdi’s Aida at the Queensland Royal Opera, the bass part in Rossini’s Stabat Mater at the Musikverein, the Old Gypsy in Rachmaninoff’s Aleko at the Lion Opera (under the baton of Mikhail Pletnev). In 2010, he also made his debut with the Bolshoi Theatre performing Sarastro in Mozart’s Die Zauberflöte. In 2011, he performed there the title role in Glinka’s Ruslan and Lyudmila staged by Dmitri Tcherniakov under the baton fo Vladimir Jurowski. At the Bolshoi, he has also performed Pimen in Boris Godunov. In 2011, he sung Wurm in Verdi’s Luisa Miller at the Lion Opera under the baton of Kazushi Ono and Boris Godunov at the Santiago Opera. In 2012, he performed Boris Godunov at the Ekaterinburg Opera and Ballet Theatre, Hermit in Weber’s Der Freischütz at the Berlin Comic Opera, the bass part in Verdi’s Requiem at the Montpellier Opera under the baton of Riccardo Muti, Il Commendatore in Don Giovanni at the Santiago Opera. In 2013, he performed Il Commendatore at the Toulouse Opera. In 2013 and 2014, he performed the Water Spirit in Dvořák’s Rusalka at the Geneva Opera. In 2014, he sung Timur in Puccini’s Turandot at the Santiago Opera. He collaborates with many renowned orchestras.

At the Mikhailovsky Theatre, the singer has performed Gremin in Eugene Onegin (production by Stanislav Gaudasinsky) and Sarastro in Die Zauberflöte (production by Pet Halmen).