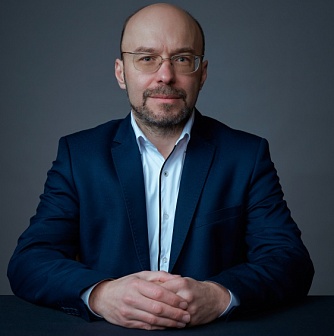 In 1995–2010, he was a second conductor of the Moscow State Academic Chamber Choir under the direction of Vladimir Minin. Since 2011, he has held classes at the Chorus Conducting Department of the Gnessin Academy and has been the director one of the choirs of the Academy. Since 2011, he has held classes at the Department of Opera and Symphony Conducting of the Academy. In 2011–2014, he was the head of the Academy Orchestra. Since 2009, he has cooperated with the Galina Vishnevskaya Opera Centre, where he has conducted Glinka’s Ruslan and Lyudmila, Mussorgsky’s Boris Godunov, Tchaikovsky’s Eugene Onegin and Iolanta, Bizet’s Carmen, Verdi’s Rigoletto, Leoncavallo’s Pagliacci, Puccini’s La Bohème, and various concerts. In 2011–2020, he was an intern conductor of the Bolshoi Theatre. At the Bolshoi Theatre, he conducted Mussorgsky’s Boris Godunov, Tchaikovsky’s Iolanta and Nutcracker, Rimsky-Korsakov’s Tsar’s Bride, Sadko and Golden Cockrel, Verdi’s Nabucco and Rigoletto, Bellini’s La sonnambula, Donizetti’s Don Pasquale, Mozart’s Così fan tutte and Le nozze di Figaro, Rossini’s Il barbiere do Siviglia, Bizet’s Carmen, Strauss’s Der Rosenkavalier, Ravel’s L’Enfant et les Sortilèges, Symphony in C to music by Bizet, Gavrilin’s Anyuta, Demutsky’s Hero of Our Time, Auber’s Marco Spada, Ivan the Terrible to music by Prokofiev, The Cage to music by Igor Stravinsky, Etudes to music by Riisager after works by Czerny, and Podgayts’s Moidodyr. As an assistant conductor, he contributed to many première productions of the Bolshoi Theatre. For 9 years, he participated in the Bolshoi Theatre Young Artists Opera Program as a conductor. Since 2017, he has cooperated with the Moscow Virtuosi Orchestra. He also participated in the finals of the 5th and the 6th International Galina Vishnevskaya Competition as well as in the 1st and the 2nd Moscow International Vladimir Kraynev Competition as a conductor. He has cooperated with Vladimir Fedoseyev, Saulius Sondeckis, Mikhail Pletnev, Vassily Sinaysky, Marcello Viotti, Fabio Luisi, Evgeny Nesterenko, Zurab Sotkilava, Irina Arkhipova, Makvala Kasrashvili, Maria Gulegina, Khibla Gerzmava, Laura Claycomb, Paata Burchuladze, Ildar Abdrazakov, Thomas Allen, Leo Nucci, Denis Matsuev, Alxander Ramm, Aylen Pritchin and other musicians, as well as with the National Philharmonic Orchestra of Russia, Tchaikovsky Symphony Orchestra, Russian National Orchestra, Pavel Kogan Orchestra, Orchestra of the Prague Radio, Toscanini Orchestra in Parma, Orchestra of Colours in Athens and Symphony Orchestra of the Porto Musical House. Alexander Soloviev has participated in recordings for Deutsche Grammophone and Naxos.